In 2017, the State Audit Office of Vietnam conducted an audit on State management of mineral exploration and mining during the period 2014-2016 at the Ministry of Natural Resources and Environment (MONRE), Ministry of Industry and Trade (MOIT) and 08 provinces/cities. One of the most important tasks of the audit was “auditing the licensing of mineral exploration and mining”.

The Vietnam Mineral Law 2010 regulates that the licensing for mineral exploration and mining is under the jurisdiction of the MONRE and provincial people’s committees, in which:

– Provincial People’s Committees shall grant the mineral exploration licenses for minerals which are used as common construction materials and minerals in scattered and small-scaled areas zoned off by the MONRE and licenses for salvage mining of minerals;

– The Ministry of Natural Resources and Environment (MONRE) licenses other types of resources and minerals.

Statistical figures of licenses for the exploration and mining of minerals granted during the period 2014-2016 are demonstrated as follows:

(i) Granted by MONRE:

The audit findings revealed several weaknesses of the licensing process for mineral exploration and mining in Vietnam during the period 2014-2016, such as:

(i) Regarding licensing procedures:

– Some exploration dossiers licensed by MONRE did not receive the localities’s response of licensing in time.

– Licensing procedures did not comply with regulations: Exploration licenses   were granted to auditees when they had not fulfilled the obligation to pay fees.

– In some provinces, dossiers approving mineral reserves were not proved to have been inspected and supervised by the Department of Natural Resources and Environment. Besides, these did not include dossiers of appraisal on mineral reserves, meanwhile the capacity dossiers did not meet the necessary requirements for organizations operating in the field of minerals exploration; some organizations/bodies conducted minerals exploration and fulfilled their financial obligations without minerals mining licenses from the Department of Natural Resources and Environment; or the approved dossier lacked  documents  showing the equity commitment letter.

– Overlapping planning: The planning for mineral activities did not consider the master plan of socio-economic development in 2020, and vision 2030; there was  overlapping in some aspects of local mineral planning and local socio-economic development planning; coastal industrial zones overlapped with the zoning of national mineral reserves; general planning and planning of construction materials development was not appropriate in terms of planning period; insufficient statistics on the remaining reserves of minerals at the time of formulating the planning scheme.

– The MONRE shall delineate and announce the areas with small-scale and scattered minerals. Areas which have not auctioned their mineral mining rights should be reported to the Government before reaching a final decision.

– The delineation of most localities did not meet related requirements of the Government.

(iii)The granting of mineral licenses in some localities was against the regulations stipulated by the law, applied for inappropriate subjects with wrong competence, proved to be overlapped and carried out without planning. 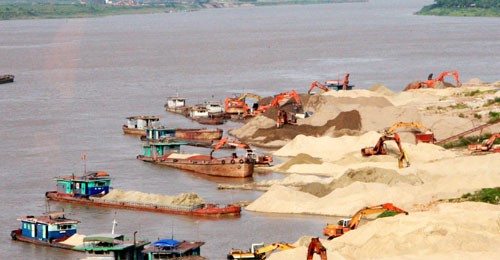 With the above mentioned audit findings, SAV made the following suggestions to the MONRE and Provincial People’s Committees aimed at rectifying existing shortcomings in the licensing process for mineral exploration and mining:

For the MONRE:Examine and consider revoking licenses of enterprises with violations; Direct related provinces to clarify the overlapping of zoning coastal industrial zones with the planning of mineral reserves so as to report to the Prime Minister for settlement; Instruct and guide mines to complete dossiers of applications for the re-granting of mineral licenses as stipulated in the Vietnam Mineral Law; to charge fees for the licensing of mineral exploration and mining.

For Provincial People’s Committees:Enhance inspection, examination and review to promptly detect violations in the mineral field; apply administrative sanctions towards violations under their competence; direct tax offices to take measures to deal with debts arising from the fees of granting minerals mining licenses, natural resource tax, environmental protection fees and enterprises’ land rents for mining ; inspect and review all mines already licensed but not operating in the prompt manner required by current regulations for handling and withdrawing licenses as stipulated in the Vietnam Minerals Law; identify and deal with enterprises illegally  mining minerals or enterprises conducting minerals mining but not carrying out post-licensing procedures; withdraw the licenses granted to enterprises that have conducted mineral exploration and mining but not obeyed  the law.